Did you see this in today’s Messenger?

To find out what the Masterplan is about go to the Minutes of the Council Meeting of 29 Sep, 2015

To give your comments go to the consultation documents.

Mark Parnell MLC (Leader of the Greens in SA) gave the reasons why we should adopt a 40km/h speed limit:

Because as residents we only use the local streets for the last kilometre of a trip, and have to stop at intersections etc., the increase in time taken is a tiny proportion of the total trip (typically no more than 10 seconds, often much less).

Councillor Paul Wormald explained why he voted against Council asking residents if they wanted a 40km/h speed limit:

Having said that, Paul noted Mark’s arguments and said that he would probably support 40km/h speed limit if imposed by the State government on all local streets in the inner suburbs.

The meeting also discussed the current process that the council is undertaking to gauge the public’s opinion.

There is currently confusion over:

There was some criticism of Council’s approach in not providing the arguments as to why we should go to 40km/h, or stay at 50km/h.  It should have done the research and provided the resultant information to residents and businesses before spending $65,000 on the consultation exercise.

A Chat with Steven Marshall

Steven Marshall, MP, Leader of the Opposition, will talk about his role as our local Member of Parliament.

This will be followed by an informal Q and A.

This meeting will also be our AGM and it is important all members attend.

The Story of the Norwood School Great War Memorial

This talk will unravel the secrets behind the construction of this unique war memorial designed by the Headmaster of the Norwood Public School and built by the children themselves.

It is important to note, that at the time the obelisk was constructed Commonwealth legislation proscribed that all funds that may have gone to the construction of public memorials be directed to the war effort. This legislative response in 1916 was not only economic in its intention but also political as the government set about trying to control and manipulate public sentiment following the disastrous events at Gallipoli and the high rate of Australian casualties on the Western Front. The enormous loss of life in the Battle of the Somme led to a decline in enlistments in Australia and to an outcry against the introduction of compulsory conscription.

It is against this backdrop that Denise Schumann will explain the motives and the inspiration that led the Norwood school community to erect a war memorial regardless of government regulations.

All are welcome to attend what promises to be a great evening of local history.

This beautiful exhibition takes the visitor from the home-front to the battlegrounds of Gallipoli and Europe where ordinary lives were changed forever by the impact of the Great War. See how a simple faded photo, a wedding dress, a bugle, a blood stained casualty stretcher and a pair of boots tell the story of courage and love, of separation and fear, and evoke memories of a time when loyalty to ‘King and Country’ was tested.

Beulah Road and plans for the “Norwood Bikeway”

What do the State Government and Norwood, Payneham and St Peters Council plan for Beulah Road?

What will it mean for residents? For cyclists? For motorists?

Come along to listen to and discuss the plans with: 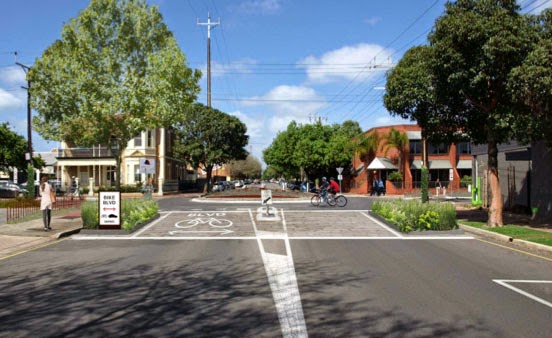